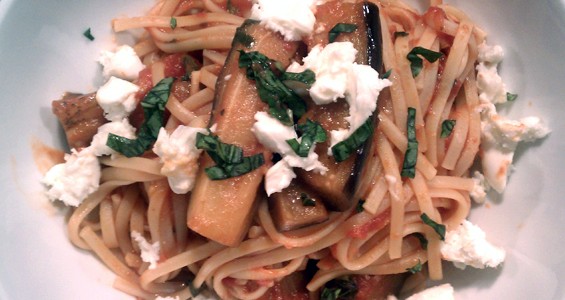 way back in the day, when jamie oliver was the naked chef, i used to watch his show religiously. one of my favorite summer pasta dishes i make is his, and my turkey pot pie is inspired by one of his cooking shows i saw ages ago.

yesterday i was in a book store and happened to come across jamie’s italy. i sat down on the floor and started flipping through it, before i realized it i was folding pages back, so of course i bought it. sometimes i tend to zone out while reading recipes

i marked a lot of recipes and eventually hope to cook through this book. this recipe however caught my eye because i had an eggplant sitting out that was on the verge of going bad. it was a great choice. i used a chili pepper (which you can leave out) that added just the right amount of heat. one tip though, turn on your exhaust because cooking raw un-coated eggplant in oil tends to not only get messy, but smokes. i didn’t set off any smoke detectors but my poor stella hid under the table.

to prepare the eggplant: per jamie’s instructions, cut the eggplant in half lengthwise, cut again lengthwise so you now have 4 pieces, then again so you have 8. chop each slice in half so now you have 16 pieces the size of your finger. if your eggplant is seedy, cut out the seeds (seeds in eggplant tend to be bitter).

in my opinion the addition of the chili pepper is great. he suggests it in the recipe and he is spot on. with out the pepper it would be good, don’t get me wrong, but it definitely adds that something that this dish needs. try adding half at first or even a quarter if you are worried about the heat. you can always add more.