hey there, i’m sharon from thyme to cook, a personal chef service in the boston area. i’m a 40 something personal chef, fitness instructor and health educator in vegan/raw and living foods. in my former life i was a biologist, with my master’s in science, working in the biotech/pharmaceutical domain for 15 years. 5 years ago i started thyme to cook and haven’t looked back. i’m passionate about food and fitness and i’m grateful that i can put the 2 together on a daily basis. you can also find me at my blogs, thyme to cook and rawk out.

this past week from my csa i got a nice haul of eggplants….i actually got eggplants from both of my csa’s) from the newton farm, i got a variety known as the oriental type. they are smallish in size about 3 inches long, with light purple and white skin.

now when i think eggplant, i think umami. umami is one of the five tastes with the others being salty, sweet, bitter, and sour. it can be thought of as the savory taste. chemically, umami actually is the “taste” of the amino acid glutamate in it’s salt form, and  it’s often referred to as earthy or meaty tasting.

eggplant itself doesn’t have umami, but it pairs well to foods that do have it, such as miso…..miso is a fermented paste made most typically from soybeans but can also be made from barley, chickpeas and other beans such as azuki. it is high in protein, vitamins and minerals and has a sweet, salty and earthy flavor. i love to use miso in dressings for salad, stir fries and soups.

here, i use miso in a glaze for the grilled eggplant.

after cutting the eggplant in half, i put them on the grill, at a medium-high temperature and grilled them, turning once after about 3-4 minutes.

i gave the eggplant a squeeze of lemon juice, a sprinkle of sesame seeds and a bit of chopped tarragon to finish. they were succulent and full of earthy, salty flavor from the miso.

the best part about this recipe is that it’s so easy….here it is

this dish would be great with a sparkling wine such as a nice, crisp prosecco.

so, try it out and get your glaze on 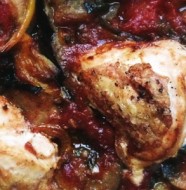 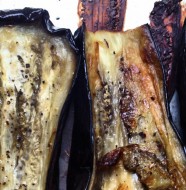 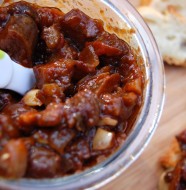