whenever i think of a wedge salad i think of a modern family episode i saw a while back. it still makes me chuckle. to be honest with you, i never noticed one until i saw that episode. either i just never noticed it on a menu or i have and i just skipped over it because of the iceburg lettuce.

i’m not a huge fan of the iceberg. it might be because back in the day, when i was younger, that’s what people ate, that was a salad. when you went out salad didn’t consist of exotic greens such as arugula or mizuna, your choice was spinach or iceberg. to me iceberg was like chicken, over played and just not tempting.

a couple weeks ago we took the kids out to dinner and the wedge was on the menu. e and i both saw it at the same time and laughed. why not, let’s just go for it. so e and i shared a wedge and we both loved it. i have been non stop thinking about it since then and decided to make one. we jazzed it up a little with some fresh from the farm bacon and veggies from our garden (tomatoes, chili’s and cumbers). the dressing, jamie oliver’s blue cheese. it was awesome and will now become a staple at dinner time.

making the wedge is very easy. grab your head of lettuce and cut it in half, then cut those halves into halves and set on a plate.

just a note: if you were serving this at a dinner party i would plate each wedge on a separate plate. if your informal like me, just throw everything onto one plate and let everyone dig in.

cook you bacon, cut your veg and make your dressing.

i used a variation of jamie oliver’s recipe.

add all to a food processor and pulse.

pour dressing over wedge, sprinkle veg and bacon over, serve.

perfect beginning to a meal, or seriously, the perfect meal 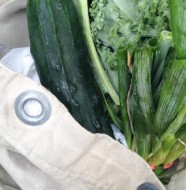 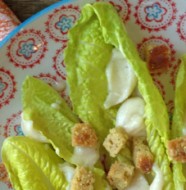