debbie posted this recipe 2 years ago and it’s been on constant rotation ever since.

korean food has been a staple for us since the boy was a wee little guy. he loved the noodles and he would eat all the veg. me, the bibimbap. put a hot pot of rice in front of me with some meat, veg an egg and of course hot sauce (don’t forget the kimchi) i’m good to go.

the kid though…he loved those noodles.

it was a good excuse for some exercise (it was a couple miles away and i didn’t own a car). it was also a great excuse to get together with friends. even better, it was a great excuse to eat really good cheap food. and then of course, he napped. napping toddler, can’t beat that.

so when we moved to the burbs and an hmart opened i got a little excited. a food mart..real kimchi, a serious seafood counter. mochi and then of course the yam noodles (also known as starch noodles or glass noodles).

i pick up a couple bags every trip i make. it’s our meal of choice when we are in a rush. when we get home and everyone is starving. when i need something quick, or really, because we crave it often.

the best part of the dish, any veg can work. spinach, bok choy, carrots…it’s up to you.

starch noodles can be found at any asian grocery as well as whole foods (i have spotted a buckwheat potato version that i think would work well. 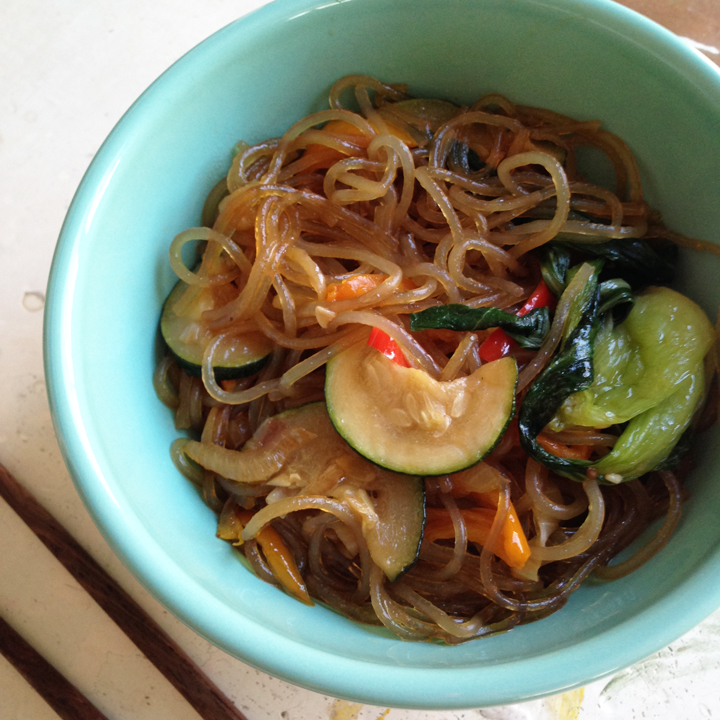 as noted above. play around with the veg, the possibilities are endless.