what you can do with a brined chicken 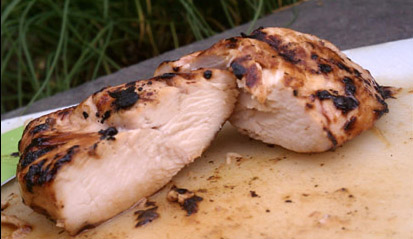 last week tons of bloggers lost posts, this morning, it appeared, in my drafts folder but that’s ok.

sometimes i play the part of a short a order cook. i’m a mom, and no matter how many times i proclaim i will not be a short order cook, sometimes i just need everyone to be happy. happy children have happy parents. thankfully i enjoy cooking, if you don’t i could see how irritating this might be.

last week we brined a chicken. it’s my favorite way to prepare a bird. the meat is flavorful and juicy, it’s moist and just delightful (when you don’t care for chicken, it really makes a difference).

last week, when j noticed we were having chicken, asked for white chicken on the bbq, meaning, cut up with ketchup. he however doesn’t like anything brown so i have to be careful with grill marks

love being a mom. i was not in the mood however, i was craving fried chicken. with mashed potatoes and a huge salad, ugh, it was divine! so i became a butcher. i cut off the legs, the wings and thighs and sliced off the breast to bbq for the kids. it was simple really. while the bbq was heating up i smothered the cutlets with salad dressing (a raspberry merlot) and grilled the cutlets for 5 minutes a side.

i have never bbq’d chicken after brining so this was a first for me. i was a little worried that i just brined a chicken for nothing, that was not the case. they were moist and juicy. best cutlets ever. j and p ate both with out a fight and asked for more. see those cutlets up there? you can see how moist the meat was. next time i bbq chicken, i brine. i wonder if it would work with just cutlets, i must research. 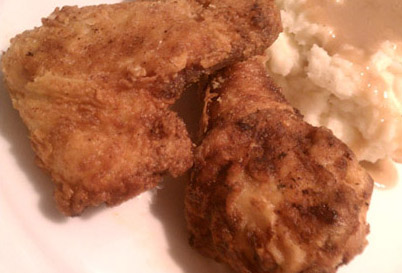 see that? now that’s fried chicken! this also had me worried about the brining process, another doubt. i thought about frying something i just spent 6 hours softening up. let me tell you, the first bite was amazing. it was so juicy, the coating really held in all the juices. i have never had fried chicken so moist and juicy, usually it’s a little dry and tasteless, not this.

the day after i made the chicken i made chick in the kitchen’s quinoa stew (i use all of the chicken, save those bones for stock!). i added lots of great veg. it’s a great dish if your a vegetarian, use veggie stock instead and skip the chicken.

have a great weekend!