i made a new years resolution that i would try and eat new things. things i wouldn’t normally make or try. a couple weeks ago i was at whole foods and grabbed a tin of sardines. i was chatting with a lady in the aisle and she was scanning the shelves looking for her favorite. i asked her what she was planning do with it. she went into this whole rant about a recipe she saw online and pointed to her favorite sardines. so i grabbed a tin.

i have never in my life tried a sardine. never. not on a cracker, not in a restaurant, no where. e wasn’t thrilled when he saw them on the counter either, but i saw this recipe on twitter later that night and i kind of felt i needed to try it. something about it, possibly the fennel (my favorite), made me want to grab a tin of sardines and get to work.

the recipe is linguine with sardines, fennel & tomato. i will admit, when i first cracked open the tin of sardines i was not impressed. it had skin, and then i noticed bones. luckily, i had a second tin that was skinless and boneless but since i had both opened i used the oil from both which gave me the 2 tbl of oil the recipe called for.

have you ever smelled garlic frying in sardine oil? it changed my life. i have never smelled something so good. e on the other hand, who was giving the kids a bath, screamed, “i’m not so sure mer” i tried to convince him it would be fine. if we didn’t like it, we could always order in

i didn’t change much of the recipe. the only thing i chose to change was the number of sardines. instead of a whole container, only because either of us have ever tried, i chose to only add 2. for us it was a smart move. i think even 3 would of been to much.

if you have never eaten a sardine you expect it to taste super fishy, like an anchovy, and it’s not. it tastes more like tuna. we were pleasantly surprised. when the kids were in bed, we poured ourselves a glass of white wine and took our bowls of pasta out to the yard. we looked at each other and both dove in.

the breadcrumbs really added so much flavor and the mixture of the fennel and tomatoes, great. the sardines were not as potent as i had originally thought they would be.

we chatted about the dish and offered a bowl to my neighbors who were outside gardening (they are huge sardine lovers). i would definitely make this again. and now i know what it tastes like and what to expect, expect an updated recipe soon. i can already see it…

(have any recipes you think i would like? send them over, thefoodyenta@yahoo.com) 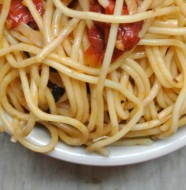 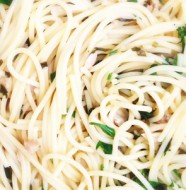