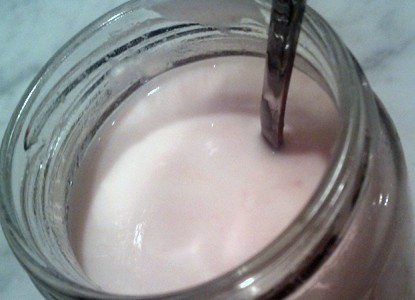 it came! my yogurt maker is here. am i too excited about yogurt? i might be, but think how many plastic containers my family won’t be using! that makes me happier than the yogurt, even though the yogurt was really good (probably the best yogurt i’ve ever had).

i made it yesterday morning. 8 hours in the warmer and at least 3  hours (i recommend over night) in the fridge. we had it for breakfast this morning.

in order to make yogurt you need a ‘starter’. i’ve been reading up on this and i agree, ‘start’ with an organic yogurt. i went with the brown cow, plain. it’s one of my favorite yogurts. Most yogurts only contain 2 live active cultures, while organic yogurts tend to have 4-6, which is what you need. i made one plain and then i flavored the rest with raspberries that i cooked down and basically made into a jelly. i was going to use the plain one as my next starter.

so here is what i did: i tried to follow the directions in the booklet that came with the maker but you know me, i can’t follow directions…i measured out 32oz of milk and poured it into a pot where i brought it up to a light boil. around 120 degrees, i used my meat thermometer to measure (hey it worked). when brought to a boil turn off the heat and immediately put your pot in an ice bath*. stick your thermometer in there and when it gets down to 95 degrees take it out of the ice and and mix in your container of yogurt.

before i prepared the milk, i started on my raspberry “jam”. i added to a small pot: 1/2 cup frozen raspberries, 1/4 cup of water and 1/4 cup sugar.

i brought it to a boil, then simmered until it had a jelly/jam like consistency. it took about 10 min, i had it cooking while i was getting the milk ready. when it was done, i ladled into the glass yogurt containers that was included with my yogurt maker.

now, back to the yogurt. i ladled the yogurt into each yogurt container over the raspberry mixture. i didn’t mix it, you can, but i like the fruit on the bottom. i put the containers in the yogurt maker. make sure to leave the individual covers off, and top the maker. turn it on, and let it go.

like i said before, the one in the middle was plain, i figured it could be my starter for the next batch, but while i was at whole foods today- yes 2nd time this week -i bought crab meat with which i plan to make crab cakes with so this will not become my starter but a dressing for the crab cakes:-) i bought a vanilla yogurt to start my next batch with.

after 8 hours i took the cover of the yogurt maker off, carefully put the jar covers on and put in the fridge. the instructions say 3 hours, i recommend over night. we tried it after 3 hours and it had a slight funk to it. it worried me. this morning though, it smelled awesome and tasted even better. i don’t think i can ever buy or eat another store bought container of yogurt again! j added some m&m’s to it and chowed down, all i heard was “mmmm” “mom this is good, you made this?” he is a great kid.

if you decide to invest in a yogurt machine and make your own, have fun with it. it’s not as hard as it sounds, i promise. you will be so happy and your whole family will enjoy it. plus, the added benefit of not using those plastic containers is totally worth it.

*an ice bath is basically a big bowl that you fill with ice and cold water. you put your bowl of, for this recipe, milk , inside in the bowl  it’s used to cool down what your making.