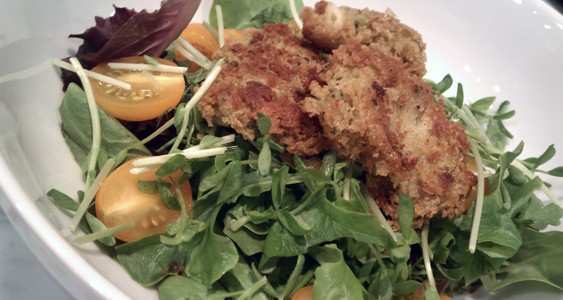 i love falafel, it’s the one thing i miss about living in the city. when i was in israel i ate it every day. when i lived in brooklyn, at least once a week. it’s one of my all time favorites. i love it on a salad, in a pita, with tahini and onions, israeli pickles, throw some hot sauce on there and i’m in heaven.

i am in the “country” now, it’s not easy to find good falafel. it’s like thai food, it’s basically come down to me trying to figure out a good recipe and cooking it whenever i’m in the mood. when i was in my early 20′s i remember making falafel out of a box but making the tahini. i was just becoming adventurous in the kitchen. tahini was a huge step for me at that point.

so after going through a number of recipes i have finally come up with my own, it’s a mixture of a number of them, they either had to much parsley or to much cumin or they fell apart. i never stopped though, i knew one day i would find the perfect recipe for me.

(to make tahini, you need sesame tahini and equal parts water or yogurt, garlic, parsley and cilantro. process until all emulsified, refrigerate)

depending on my mood, i either serve them in a pita with lettuce and tomatoes, some tahini and hot sauce, pickles if available. tonight we are having them over salad with homemade tahini and naan on the side.